Currently, we collect FC KPK Job Ad 2022 from the Daily Aaj newspaper. Applicants who are interested in looking for FC Jobs 2022 at KPK should not miss this opportunity.

Frontier Corps, also known as FC, a Pakistani paramilitary force in Baluchistan and Khyber Pakhtunkhwa provinces, maintains law and order while maintaining control of the country’s borders with Afghanistan and Iran.

Frontier Corps is an umbrella term for two separate organizations: the FCKP stationed in Khyber Pakhtunkhwa (previously known as the Northwest Frontier Province and now includes the Federally Administered Tribal Areas) and the Baluchistan Province.

Each sub-division is headed by a Junior Inspector General, who is a Pakistan Army officer with at least the rank of Major General, although the force itself falls under the jurisdiction of the Ministry of Home Affairs.

Desired people from all over Khyber Pakhtunkhwa can participate in this recruitment process. Qualified mid-level, matriculated, and intermediate applicants may apply for these openings.

Interested candidates who meet the requirements for any of the above positions can apply directly at Atif Shaheed Park, Dera Ismail Khan Cantt. The registration date for each district is available in the Join FC Khyber Pakhtunkhwa announcement. 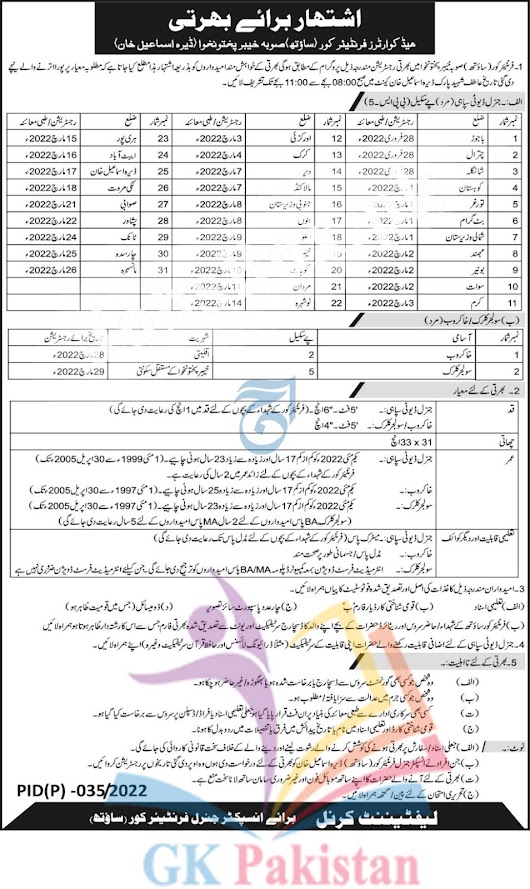